Now in its eighth year of awarding scholarships and recognizing community leaders, the members of the Barbara M. Simpson Memorial Scholarship Foundation realized that they couldn’t house their annual function in the small ballroom like it used to in years gone by. Instead, on May 10th, 2018, the Grand Ballroom at Eastwood Manor was reserved for this most elegant affair, once again under the distinct patronage of Ms. Trudy Deans, Consul General, Consulate General of Jamaica, New York, who was represented by Ms. Arlene Bennett.

There was an overwhelming response to the scholarship award this year and out of more than thirty well-qualified applicants, the members could only have offered four scholarships.  They all seemed so deserving and with stronger financial backing, there’s hope to offer more scholarships in even larger amounts. The students came from varying backgrounds and different schools as well. They were each given a Certificate of Scholarship for $1,000.00, an autographed copy of Dr. HoSang’s book, “Change of Fortune,” and a copy of the Dr. Seuss book “Oh the places you’ll go”, signed by the Chairman and the Secretary of the BMS Foundation.

Lesley Geronimo from Bronx Envision Academy High School stated in her essay that as a future pediatrician, she wanted to make it her mission to create a generation of Dr. Geronimos to follow in her footsteps. Angelique Starke of Sacred Heart Greenwich High School reflected in her essay that when she daydreams, she sees herself as a change agent, transforming the lives of others through a commitment to humanity with love and respect. Liz C. Mercedes, from Bronx Envision Academy said she’s persistent and was raised with a strong conviction that education is vital in life and that we must do what we love. Mt. Vernon High School sent the BMS organization the only male awardee,  Joshua Zencke,  who wanted to do anything to further his education in the field of Technology and said that his dedication and motivation today is a result of his perseverance and hard work. 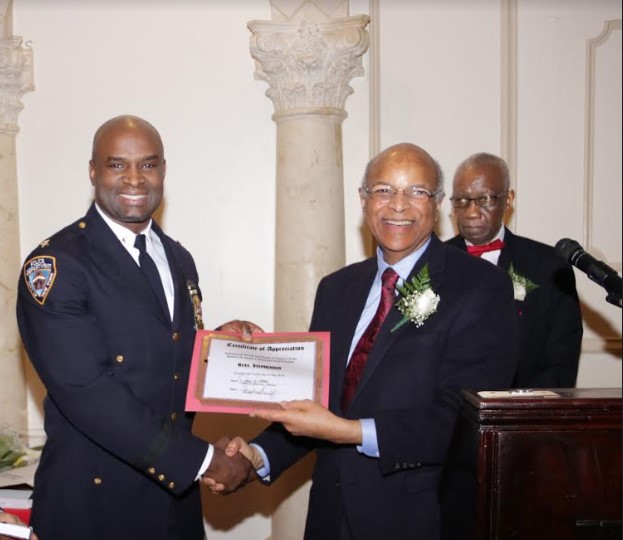 The Guest Speaker Deputy Chief Ruel Stephenson of the 47th Precinct, fully clad in his uniform, brought words of wisdom and encouragement to the students in particular and to the attendees in general. He was very warmly received and was applauded for what he said as well as for his achievements, given his modest upbringing. His gentle and humble presence brought a certain calm and he interacted with the group at every opportunity that lent itself.

There were many well wishers to the Scholarship Recipients as well as to the Community Service Honorees as was evident amongst the pages of the Keepsake Souvenir Publication. They included but were not limited to the Prime Minister of Jamaica, The Most Honorable Andrew Holness, Consul General, Ms. Trudy Deans, New York State Assembly Speaker, Carl Heastie, Westchester County Legislator Lyndon Williams, Rev. Chin of the First United Methodist Church of Mt. Vernon and the Management and staff of The Dumpling Cove. The Chairman, James H. Alston, Esq., remarked that “We must insulate our children from all collateral attacks by ensuring that they get an education – the one thing that can never be taken away.”

The BMS Community Service Award plaques were uniquely designed to reflect the personality and ideals of each Honoree. Mr. Fitzroy Thompson, President of the Jamaica Ex-Soldiers Association, New York received one that read: “For being fully committed to the ideals of Brotherhood and Unity.” That of the Parish Administrator of St. Luke’s Episcopal Church, Mr. Donald Bookal, was etched: “For selfless dedication and vigorous work on behalf of his Lord, his Parish and his Neighbors.” Inscribed on the plaque to the third Honoree and only lady, Ms. Janice Julian of Caribbean Food Delights, were the words: “Blending Communications, Business, Public Relations and Philanthropy for the Betterment of the Community.”

This year each Honoree was also surprised with a Proclamation naming a date in Westchester County as their day and of course this was fashioned in the office of the Leader of the 13th District in Westchester, none other than Legislator Lyndon Williams. He so perfectly designed and carefully captured and framed the personalities and work of the Honorees.

Once again the life and legacy of Barbara M. Simpson resulted in a dynamic celebration after specific planning for specific and definite purpose – Education is the key.

About Jennnifer P. Lumley, the Author

Jennifer P. Lumley is a distinguished Author and renowned Freelance Writer who has excelled in the area as an orator both in the English language and the Jamaican vernacular – patios. She has always made a conscious determination to perform above expectation and to orderly arrange to contours of life choices necessary to be more enlightened. Lumley, a former Financial Specialist, is favorably disposed to the New York lifestyle.