Devon Harris is the guest speaker at Atlanta Jamaica Association (AJA) Independence Ball and Scholarship Awards ceremony on Saturday, August 12, at the Sheraton Atlanta Hotel, 165 Courtland St NE, Atlanta, GA 30303. Devon  is a Three-time Winter Olympian and original member of the Jamaica bobsled team. Since his time on the slopes, he has become a highly sought after international motivational speaker, author and philanthropist.

Born on Christmas Day, 1964 and raised in Waterhouse the most notorious enclave of Olympic Gardens in Kingston, Jamaica, the greatest gift Devon Harris ever received was the belief that a positive attitude and a never say die philosophy would carry him farther than a sense of injustice. 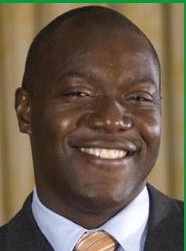 A graduate of Ardenne High School and the prestigious Royal Military Academy Sandhurst in England, Devon received a Queen’s Commission in December 1985 and served in the officer corps of the Jamaica Defence Force until December 1992 when he retired as a Captain.

Encouraged by his commanding officer, Devon tried out for and was selected to the first Jamaican bobsled team which competed in the 1988 Olympic Games in Calgary, Canada. Their exploits inspired the Disney blockbuster movie Cool Runnings. Devon also competed in and was team captain in the 1992 Winter Olympic Games in Albertville, France and the 1998 Games in Nagano, Japan.

The Keep On Pushing Foundation which he founded in 2006 aims to support and enhance the education of kids in his old neighborhood of Waterhouse by providing practical solutions to the challenges that are preventing them from getting properly educated.

Devon also works with Right to Play as an athlete ambassador, supporting Right to Play’s efforts in using sports and play in refugee camps around the world to enhance child development and build community capacity.

During the 2018 Olympic Games in PyeongChang, Devon was honored by the World Olympian Association and inducted as an Olympian For Life in recognition of the significant contributions he has made to society.

As an ex-serviceman, Devon understands the commitment, sense of duty and sacrifices made by those who volunteer to serve. As a private citizen he is cognizant of the fact that the freedoms he enjoys are paid for by the courage and sacrifice of these men and women. As a result he has also devoted time to visit the troops serving in the Persian Gulf.

Devon is married with five children, resides in New York and travels internationally as a Motivational Speaker, offering a captivating message of persistence, teamwork, inspiration and hope. He is the author of the motivational children’s book Yes I Can! and a semi-autobiographical motivational book Keep On Pushing: Hot Lessons From Cool Runnings.

For more information on Mr. Harris, please visit his website at www.devonharris.com