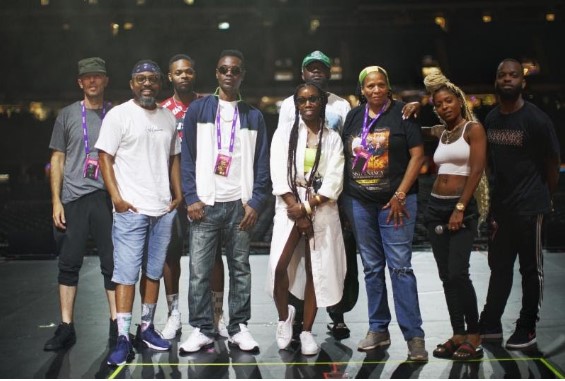 On Friday July 5th, Grammy Award Winning singer Estelle curated an evening of Afro-Beats, Reggae, Dancehall and Soca for the 2019 Essence Music Festival in New Orleans. In its 25th anniversary, the songstress thought it would be the perfect time to merge the standard fans of R&B, Hip Hop, & Soul with fans of Caribbean and African music at the Essence Music Festival. The evening consisted of an hour set during the main stage at Mercedes Benz Superdome, followed by a 4 hour event at Republic Nola for Essence Music Festival’s After Dark Series.

The mainstage set included performances by Estelle, Sister Nancy, Machel Montano, Wayne Wonder, Kranium, Wale, Rotimi and Hood Celebrityy with music by Max Glazer and Shacia Marley, while the After Dark Series included all previously mentioned along with Spice, Luke James, Melanie Fiona, Rafiya and female twin duo signed to Estelle’s label, Established 1980, Nick and Navi. There was no shortage of good vibes, as the sold out event reached capacity with patrons who traveled as far as Europe and Toronto to solely attend.

“I was grateful for the opportunity to put together such a great roster of artists for The Essence Music Festival,” said Estelle. “We gotta do more than just scream the word Culture. Caribbean and African music makes people feel good and I wanted to just showcase that notion in such a fun city like New Orleans, at such a prestigious music festival,” she concluded.

The latest single and video from the album is “Lights Out”. “Lights Out is my favorite song off the Lovers Rock album as I feel it truly embodies what Lovers Rock is to me,” said Estelle about the track. “The song came effortless to me and I love how it expresses the beauty in vulnerability and desire.