On Saturday, June 8th, the Taste of Jerk event, held at the historic VP Records retail store in Queens, NY, officially launched the 2019 Grace Jamaican Jerk Festival NYC, which will be held Sunday July 21st at Roy Wilkins Park. The Taste of Jerk, as the name suggests, provided media and the public with a sample of the event which is filled with food, music, and cultural entertainment.

VP Records Director of Business Development and Jerk Festival Event Coordinator, Richard Lue welcomed media, special guests and sponsors, as he served up information on what to expect at this year’s festival. Lue announced that Naomi Cowan was just added to the festival’s music line up, in addition to Shenseea, Capleton, Fay Ann Lyons, Bunji Garlin and Christopher Martin.

Eddy Edwards, CEO of Jamaica Jerk Festival USA, announced that this year’s Cultural theme will honoring Jamaica’s cultural icon, Miss Louise Bennett-Coverley, known by all as “Miss Lou” who would have celebrated her 100th birthday on September 7th. Dressed in classic Miss Lou costume, cultural activist and Co-Founder of CPR Reggae, Sharon Gordon, entertained the crowd with “Bun and Cheese,” a poem written by Miss Lou. 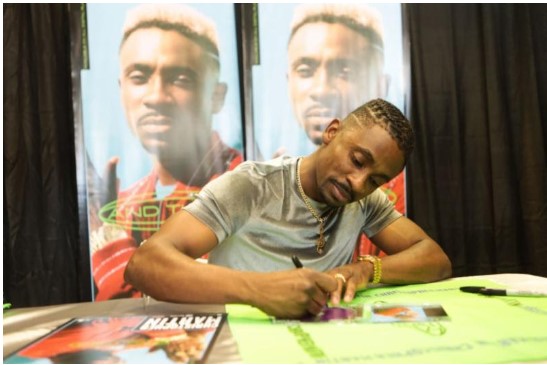 Christopher Martin made a special appearance and stated, “I am looking forward to the Jerk Festival, there are some really beautiful songs on my new album and my band and I are looking forward to performing them for the masses.” Martin spent three hours signing autographs for fans who purchased his new album “And Then”, took photos and talked to his many admirers who showed up to meet him.

Yogis Restaurant, Breezes Island Grill, Kingston Grill, and Chef Elvis Caribbean Cuisine participated in a friendly competition. Breezes Island Grill stood out with their Oxtail Empanadas, a fusion of Latin and Jamaicans’ favorite. Judges Chef Rudy Straker, of Food Network’s Chopped and Hulu series, Around the Way, along with last year’s Celebrity Cook Off winner, Chef Ji Cha, of the Fox series, Hell’s Kitchen, selected Yogi’s Restaurant as the winner of the Taste of the Jerk competition with their classic Jerk Chicken. “They took their time and paid attention to the actual seasoning process and it showed in the end result. It was flavorful and juicy,” said Chef Rudy Straker.

Other participants included Everything BB – The Official Buju Banton Clothing Line, Fit BK/FITQB, Stamina Fix Beverages, Metro Plus, National Bakery, Bricks 4 Kids, Sun Run, Numbers Clothing and Deh Abroad who will be at the festival promoting their products and services. The little ones enjoyed face painting and fun activities at the mini kidz zone.

DJ Roy and the Irie Jam crew broadcast live from the event along with Reggae King Radio, attracting a wide cross-section of the community, as they stopped by for A Taste of Jerk.
“The Grace Jamaican Jerk Festival has showcased the best in jerk cuisine, music and fun year after year, and this preview event provides media and the public a personal tour of what is to be expected on July 21st”, said Richard Lue. “The 2019 music lineup is sure to be high energy and we anticipate an increase in attendance for this year.” he concluded.

Tickets are on sale now at www.jerkfestivalny.com and at authorized retail outlets in the New York tri-state area. The Grace Jamaican Jerk Festival, NY is sponsored by The Jamaica Tourist Board, Tower Isle Patties, Continental Bakery, and produced by Jamaican Jerk Festival NY, LLC in association with VP Records.