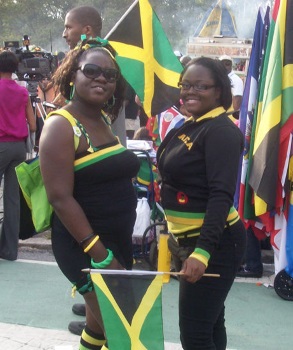 MAYOR OF KINGSTON SCHOOLED ABOUT POT INDUSTRY IN DENVER—03/14/15
Angela Brown Burke, the mayor of Kingston, is visiting Denver, Colorado, to learn more about the marijuana industry. The mayor met with officials from Denver and the state to discuss laws and regulations. Brown Burke noted that she had learned much about the Colorado operations and is especially excited about the business opportunities expected to arise in Jamaica because of newly legalized marijuana.

JAMAICAN MAN ON WANTED POSTER CAUGHT—03/15/15
According to immigration authority Michael Fahy, it took only four days after the Bermuda Department of Immigration posted a photo of Robert George McFarlane that he was reported and caught. The “wanted felon’s capture indicates how effective the publication of his photo was. McFarlane is a Jamaican national who was in the country illegally.

JAMAICAN BOBSLED ATHLETE TO SPEAK IN BURLINGTON—03/16/15
Devon Harris, a founding member of Jamaica’s bobsled team, will speak at the yearly Burlington Diversity Conference, which will be held at the end of March 2015. Harris is a motivational speaker and is set to deliver the opening address at the conference. Also speaking at the conference will be a former United States Senator, Carol Moseley Brown.

JAMAICAN ENTREPRENEUR RECEIVES RECOGNITION IN SOUTH FLORIDA—03/17/15
Andre Kay, who was born in Jamaica, has been recognized for his social-media management company’s success. Kay founded Sociallybuzz, an advertising and marketing firm that provides a little of Jamaica to everyone who logs on to the site.

JAMAICAN FILM COMMISSIONER LOOKS FOR HOLLYWOOD PARTNERSHIPS—03/18/15
Carole Beckford, Jamaica’s film commissioner and the manager of creative industries at JAMPRO, is looking for closer ties with Hollywood in terms of investments and collaborations with artistic talent from the California film capital. The Jamaica Film Festival of 2015 is being presented as an opportunity to gain recognition from foreign investors for filmmaking on the island.

UK RECOGNIZES WOMEN OF REGGAE—03/19/15
Donald Harper, a veteran of the music industry in the United Kingdom and an academic, is highlighting the contributions of women to reggae music in the UK during the 1950s and 1960s. While many women were involved with reggae as singers, musicians, and song writers, most have been forgotten. Harper is now calling attention to these women, some of whom continue to perform despite their age.

JAMAICANS CELEBRATED AT PENN RELAYS—03/20/15
Jamaica has been a strong presence at the Penn Relays held at the University of Pennsylvania’s Franklin Field for many years. They have been consistent winners at the competition since their first appearance in 1964. The winning Jamaican athletes at the Penn Relays now have their names displayed on the Penn Relays Wall of Fame.

CANADIAN REGGAE GROUP POPULAR IN JAMAICA—03/20/15
Despite the fact that critics in the United States hate the Canadian reggae group Magic!, the artistes are quite popular in Jamaica, the birthplace of the genre. “Rude,” the group’s debut single recording, sold three million copies in the U.S., but many critics objected to their interpretation of the Jamaican sound. However, in Trelawney, and on radio station IRIE FM, Jamaican fans have enthusiastically accepted the group and its reggae performances.