Jamaica’s world-renowned, Grammy-nominated musician, Dr. Monty Alexander, CD, is scheduled to perform at the Miramar Cultural Center on Saturday, April 18, at 8:00 pm. The Monty Alexander Trio will pay tribute to his longtime friend and master guitarist Ernie Ranglin, who will be honored at the concert.

Alexander and Ranglin share a special friendship, with each having mutual admiration for the other. They have recorded several albums together and worked as studio musicians in the then developing Jamaican music scene in the early ‘50’s. Since then, their musical paths have crossed on several occasions as both, rated among the best in the world, have  ascended to the pinnacle of their craft.

“We want to show Ernie Ranglin some love and let him know how much we treasure him and his contribution to Jamaica’s music”, stated Eddy Edwards, CEO of Riddims Marketing, Inc., who has partnered with the Miramar Cultural Center to present the Monty Alexander Concert. “The moment we mentioned the idea to honor Ernie to Monty, he was all in. We think there is no better way to show appreciation to Ernie since his recent retirement”.

Dr. Alexander, whose new jazz album ‘Wareika Hill RastaMonk Vibrations,’  held the number one spot on US Jazz and NACC radio, weeks after its release as a tribute to his roots, will perform along with JJ Shakur on bass and Jason Brown on drums. As Dr. Alexander tells it, the album is a compilation that encapsulates the genres of roots, reggae, ska and jazz into one album – all of which have had significant impact on his musical psyche and made him into the West Indian jazz maestro he is today. The Caribbean musical genius and Jamaica College alum says he is excited to return to South Florida and looks forward to seeing Ranglin.

Ernie Ranglin, OD, will be recognized for his outstanding contribution to Jamaican music. The retired musician will be treated to a fine selection of music by his long-time friend Monty Alexander at the Miramar Cultural Center on April 18th.

Tickets are available at www.miramarculturalcenter.org, the Miramar Cultural Center Box office or by phone at 305-602-4500.

For a sample from Dr. Alexander’s latest album or to hear the backstory, visit him on YouTube or at montyalexander.com. You can also like him on Facebook at facebook.com/officialmontyalexander or keep up to date on his performances on Twitter at @montyHKE. 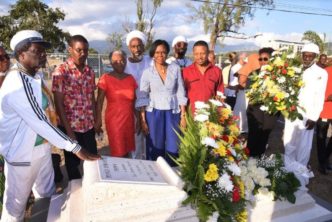