Chronixx starts the new year with a fresh perspective on his new single, “Safe N Sound” (via Soul Circle Music). The eponymous luminary of modern-day Jamaican reggae and dancehall marks the first release of 2021. The track co-produced by Chronixx and Romain “Teflonzincfence” Arnett strikes hard with a foreboding bass drum rumble and slashes of viola. It pivots into a digital syncopation of booming 808 percussion and vibrating synth keys. Chronixx calls for an uprising during a dire time filled with hypocrisy and corruption. He declares the need for “more love flowing in the streets” and “evolution time.” He carries a timely  unifying message, yearning for the global community to feel safe and sound, especially in oppressed nations.

With a post-apocalyptic backdrop, Chronixx unleashes a striking video, co-directed by himself and Samo, to accompany the song. 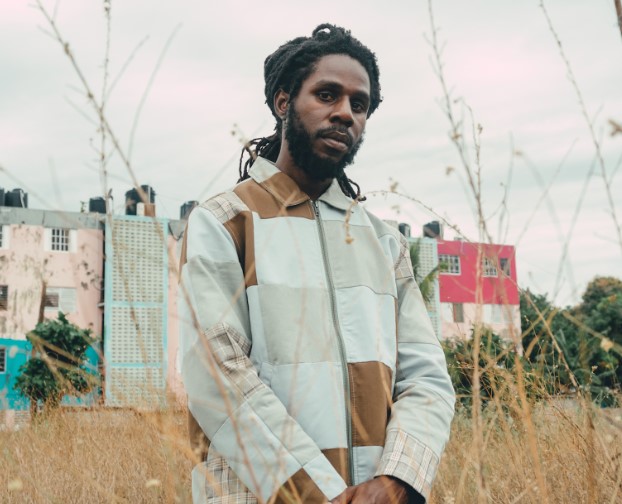 Chronixx, who has undeniably ushered a soulful, conscious, and musical movement out of Jamaica, proved that he is a force to be reckoned with on “Dela Move,” last year’s revealing prelude to his sophomore LP. Despite the album’s postponed 2020 release, Chronixx maintained a heavy presence on his hot-streak of singles which also included “Same Prayer” (featuring Kabaka Pyramid) and “COOL AS THE BREEZE (FRIDAY).” An exclusive performance of “COOL AS THE BREEZE (FRIDAY) was broadcast on The Tonight Show Starring Jimmy Fallon, making it the third time Chronixx appeared on the late night talk show.

A bounty of Chronixx guest verses build anticipation for his next studio project. He celebrated his African roots alongside Agent Sasco on “Represent.” Chronixx was featured on Jah9’s “Note to Self (Okay),” where he waxed a zen-like sense of calm amidst an idea of the disruption of world peace. More collaborations with Jamaican brethren followed on Keznamdi’s “Victory” and Dre Island’s “Days of Stone.” The demand for Chronixx’s versatile flow of conscious lyrics and heart-warming melodies rang through the music industry as he linked up with Alicia Keys on the “Underdog” Remix featuring Protoje, Lucky Daye on “Roll Some Mo,” Free Nationals on “Eternal Light,” and Black Thought on “Afrikan Children,” produced by Salaam Remi.

Ahead of Inauguration Day, U.S. President Joe Biden and Vice President Kamala Harris unveiled a 46-song playlist, which featured “Eternal Light” in honor of their administration’s upcoming arrival in the White House.

Chronixx will continue to release music in 2021 with new announcements on the horizon.

Since his #1 U.S. Billboard chart-topping releases – 2014 Dread & Terrible EP followed by his 2017 Chronology album – Chronixx has ignited a movement for a new generation that has brought reggae and Jamaican culture to the world and lured listeners of other genres. As part of that, he collaborated with Ed Sheeran for a fun-filled summer-jam remix of “I Don’t Care,” featuring Justin Bieber and Koffee in 2019. Chronixx rounded off 2019 with Free Nationals on “Eternal Light” and joined Wiz Kid on StarBoy’s “Jam.” He has sold out headlining shows across Africa, the Caribbean, the U.S., Canada, Japan, Australian and Europe. In the UK, his previous nationwide headline tours include a record-breaking date at London’s Alexandra Palace, where Chronixx played to over 10,000 fans, making it the largest capacity headline show by any roots reggae artist in British history. He has graced the stages of major music festivals, including Glastonbury, Coachella and Governor’s Ball, not to mention the fact that he also landed highly-praised support slots for the Stone Roses in Manchester City FC’s Etihad stadium, U2 at the Barclays Center in Brooklyn, and Nas and Ms. Lauryn Hill on their 2017 North American tour. Advertising executives tapped him for an Adidas Originals campaign, he landed features in Vanity Fair, Vogue, GQ, and The New York Times and performed on The Tonight Show Starring Jimmy Fallon three times. The Netflix series Top Boy featured the Chronology hit “Skankin’ Sweet,” and a Jo Malone fragrance campaign was scored by  “I Can.” Chronixx will return in 2021 with a new musical project, starting with the latest single “Safe N Sound.”