Undeniably one of the hardest working bands on the scene, ten-times GRAMMY nominated THIRD WORLD this summer celebrated the release of their 22ndstudio album, More Work To Be Done produced by Damian “Jr Gong” Marley. The Reggae Ambassadors recently completed a very successful tour around the world – conquering 4 continents and 10 countries including USA, Canada, France, Spain, Tunisia, Ghana, Austria, Netherlands, Switzerland, Curacao, the band describes their experience as “POWERFUL, REFRESHING AND ENCOURAGING.”The key to longevity for the band is the personal connection with their fans and music lovers through touring.

“Touring is everything. We take you on a 45 year symphonious journey.  It’s our way of sharing our passion with the world and thank everyone in person. Third World show is always a little different, there is something there for everyone.” explains the band.

From their modest 1975 beginnings as an opening act for the Bob Marley & the Wailers’ World Tour, to present times, THIRD WORLD has stood the test of time delivering a lasting memory through their showmanship. Shortly after concluding their 2019 winter touring season, and in keeping with the MORE WORK TO BE DONE sentiment, the globetrotting band launched their intercontinental journey at the Issa Foundation Fundraiser at Couples Resorts in Ocho Rios alongside Grammy Award-winning Australian group Air Supply and rising star Koffee.

Thereafter, they carried on their ambassadorial reggae duties to Athens, Greece where memorable moments weren’t only for fans, but for the band themselves – delighted in a 360 moment by sharing the stage of sold-out audiences in Athens, Greece and at the Hollywood Bowl with Damian “Jr.Gong” Marley; the offspring of the man who gave them their first touring experience. The cherished memories continued as THIRD WORLD performed fan favorites and classics such as “96 Degrees in the Shade” and tracks from their new album including “Loving You Is Easy” and “Na Na Na.” This significant tour also received well deserved proclamations and keys to 2 USA cities; Brooklyn, NY and Hartford, CT. “It was a joy to touch the hearts of so many fans over the years and in this 46 years journey. It was beautiful to meet the sons and daughter of our core fans from the 70’s and 80’s who are now festival and concert goers. We give thanks for it all.”

The humble band reflects on the revered moments of 2019. “At our Third World and Family showcase in Kingston last December we honored artiste we have admired over the years, including Big Youth, Toots, Yellowman and Freddie McGregor. We also had the privileged at our Third World and Family 45 year showcase in Florida in July, to honor noteworthy musicians and the team who help us along the way, including Winston Barnes, Carl Barvior, Colin Leslie and Myrna Williams, to name a few. Third World has always been 1 big family and we have had the honor to have top musicians jam with us and a great technical alongside us.”

Speaking on the road ahead, THIRD WORLD added;  “As we embark on this new relationship with Ghetto Youth International we give thanks to the team we have behind us.. Being in the studio with Damian and musicians / technical crew behind the scenes in the studio creating the new album was so monumental in our 46 year journey.. and look out.. There is still “More Work To Be Done”. 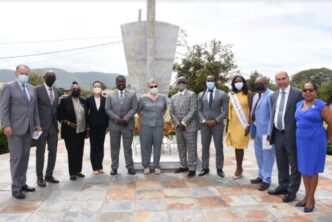