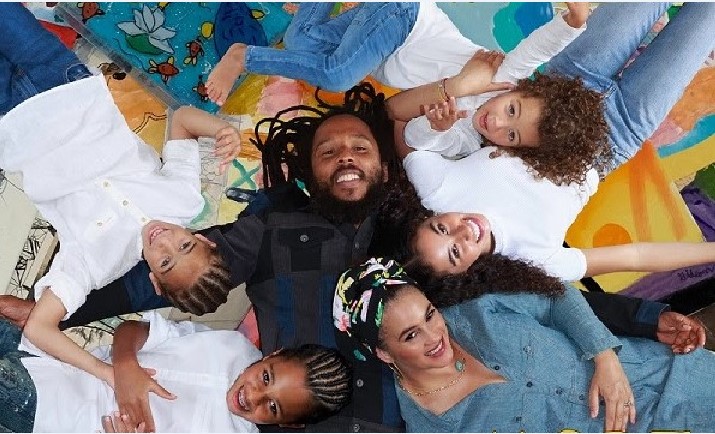 Iconic, Grammy®-winning reggae artist Ziggy Marley releases his new family album, MORE FAMILY TIME, today, distributed in the Caribbean by Tuff Gong International. Get it here! The album is a follow-up to his 2009’s Grammy® and Emmy winning album, FAMILY TIME. Make sure to catch Ziggy’s performance of “Play with Sky (Feat. Ben Harper) on The Today Show later this morning during the 10am hour.

To create the album, Ziggy aimed to capture the energy of his 4-year-old son and put it into music form, the result will captivate children, while also keeping their parents engaged via his signature Reggae sound.

Ziggy has a number of friends being featured on the album including Ben Harper, Sheryl Crow, Lisa Loeb, Tom Morello, Busta Rhymes,

A portion of proceeds from the album will benefit Ziggy’s 501(c)3 URGE, which supports the education, social development and overall well being of the Chepstow Primary School and the One Love Youth Camp, both in Jamaica.

Also announced today, Ziggy will host a concert, drive-in style, on Saturday, October 24th at the City National Grove of Anaheim. There will be two sets, the matinee will be a kids’ focused set and the evening will be a more classic Ziggy performance. All cars, families and attendees will be socially distanced and the venue will follow strict COVID precautions. Tickets will go on pre-sale on Thursday, 9/24 at 10am PT and public on-sale will begin on Friday 9/25 at 10am Pacific Time.

3. Music Is In Everything (feat. Lisa Loeb)

An eight-time GRAMMY® winner, EMMY® winner, humanitarian, singer, songwriter and producer, Ziggy Marley has released fifteen albums to much critical acclaim. Now with his own label Tuff Gong Worldwide, and publishing company Ishti Music, Marley has complete control of his master recordings and publishing. His early immersion in music came at age ten when he sat in on recording sessions with his father, Bob Marley.  After eight records with The Melody Makers and three GRAMMY® Awards, with such chart-topping hits as “Look Who’s Dancing,” “Tomorrow People” and “Tumbling Down,” he kicked off a legendary solo career in 2003 with Dragonfly. He impressively garnered the GRAMMY® Award for “Best Reggae Album” in 2006 (Love Is My Religion), 2013 (In Concert), 2014 (Fly Rasta) and 2016 for the self-titled Ziggy Marley – which marked his fourth consecutive debut at #1 on the Billboard Top Reggae Album Chart. His first children’s album Family Time received the 2009 GRAMMY® for “Best Children’s Album,” and he also took home a Daytime EMMY® Award for “I Love You Too,” which shares its title with his 2012 debut children’s book, a multicultural picture collection based on the beloved song, which explores a child’s relationship with parents, nature and the unstoppable force of love. Tapping into his expansive creativity, he created the graphic novel, MARIJUANAMAN and launched Ziggy Marley Organics—an innovator in GMO-free coconut oils and hemp seed snacks. As an extension of his passion for health and sustainable living – Marley published the Ziggy Marley & Family Cookbook in 2016. In May 2018, Marley released his most recent album Rebellion Rises.